The Upside of Anger 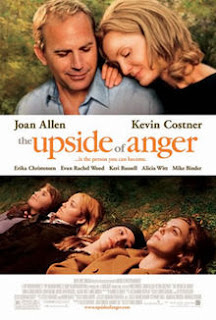 In the first few minutes of Mike Binder's The Upside of Anger, it becomes quite clear that Terry Wolfmeyer (Joan Allen) is a very bitter woman. Matters only get worse when her husband runs off. It doesn't help much that she's a drinker too.

Life must be hell for Terry's daughters Hadley (Alicia Witt), Emily (Keri Russell), Andy (Erika Christensen) and Popeye (Evan Rachel Wood). Their mother is proud of them, but her attempts to praise them are futile. (Just watch Terry's reaction to Hadley's post-graduation plans.) Wonder if their lives were like this when they were younger.

It doesn't mean Terry isn't happy with her daughters' successes. It's just she wants the best for them. She can't help but feel angry when she see them with something less than perfect. (Terry's mental response after finding Andy in bed with a man she doesn't trust is priceless.) But then again, aren't most mothers like this?

Terry clearly just needs a man in her life. Enter Denny Davies (Kevin Costner), a former baseball star turned DJ. He's not really a shoulder for Terry to cry on but rather someone for her to vent her anger out on (with the occasional bedroom romp). Isn't love grand?

The Upside of Anger is more cynical than a comedy should be, but it has a certain charm to it. Binder gets great work out of his actors, but this is definitely Allen's show. The strange thing is I'm going to be exactly like Terry several years down the line. Eep.

My Rating: ****
Posted by MovieNut14 at 11:14:00 PM
Email ThisBlogThis!Share to TwitterShare to FacebookShare to Pinterest
Labels: 2000s, movies, reviews