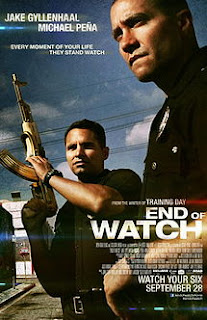 David Ayer's End of Watch captures the latter reality. During a time in Hollywood where the ugly side of the law is often depicted, this film shows the ugly side of the criminal world. And boy, it's a brutal portrait. (Then again, this is directed by the same man who wrote Training Day.)

End of Watch stars Jake Gyllenhaal and Michael Pena, and both are fantastic. Their roles of Officers Brian Taylor and Mike Zavala make them seem like the cocky cops that are usually background characters in most police dramas, but they're clearly competent. And even though they might not act like cops sometimes, they follow the law that they enforce.

It's not surprising that there are a few elements of Training Day within End of Watch. It's fortunate that Taylor and Zavala aren't like Alonzo Harris. (If they were, this would have been a very different film.) They're much more like Jake Hoyt. They witness the many horrendous deeds committed by man but they don't succumb to the many vices of criminal life like the people they arrest. Thank God.

To be honest, that trailer was pretty misleading. I thought it would strictly focus on gun fights like most crime films. What I got was a damn good film. Something's stopping me from calling it great though. (Maybe the shaky cam?) Still, don't ignore this film. It's really good.