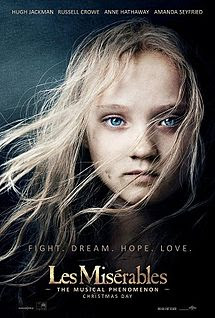 Tom Hooper is an interesting director. He first got recognized from the multi-award-winning mini-series John Adams. A few years down the line, The King's Speech is released, which again won many awards. (Though some were annoyed that he won Best Director instead of David Fincher.)

Now his new film Les Miserables may not get the same recognition as those two other projects (with the exception of perhaps a few categories), but it'll certainly be a crowd pleaser, especially to those who saw it on Broadway. (Trust me. The showing I went to was mobbed.) I myself never got to see it on Broadway nor did I read Victor Hugo's novel, but I thoroughly enjoyed the film.

The one attribute of Les Miserables that's been promoted heavily is that the actors are actually singing on camera rather than lip-syncing the playback. And boy, does it leave an impact. Hugh Jackman completely obliterates his action star image here. Russell Crowe, although not the strongest of the actors, certainly holds his own. Anne Hathaway is definitely the most heartbreaking of them all. Young stars Amanda Seyfried, Eddie Redmayne (who has a very impressive set of pipes) and Samantha Barks are also very good. And Sacha Baron Cohen and Helena Bonham Carter steal every scene they're in. (Pun intended.)

As with all musicals, there's the matter of choosing a favorite musical number or two. For me, they were Hathaway's rendition of "I Dreamed a Dream" (that song alone should earn her an Oscar) and Redmayne's rendition of "Empty Chairs at Empty Tables". You can just hear their pain as they sing.

Not a lot of people might agree with me, but I loved it. Yes, Hooper's direction is all over the place (his affinity for Dutch angles is evident), but he does succeed in providing a grand tale for mass audiences. Hey, I may be in the minority of thinking this, but this is an excellent film.