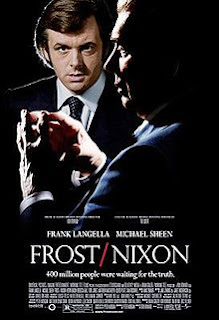 When a scandal emerges, the media often pounces on the unsuspecting parties like what a lion does to its prey. They'll consume as much as they can before leaving the carcass to rot out in the sun. The unfortunate victims never knew what hit them.

Of course the biggest scandals are the ones targeting political figures, especially if the topic in hand (no pun intended) is sex. Let's be honest. Have the political careers of Bill Clinton and Eliot Spitzer really recovered after their little mishaps? (Well, Clinton has, but Spitzer's still got a long way to go.) But no political scandal will ever top the frenzy that was Watergate.

Ron Howard's Frost/Nixon is set in the few years following Watergate and the resignation of Richard Nixon (Frank Langella). British television personality David Frost (Michael Sheen) sees an opportunity to further his career by interviewing the disgraced former President. But will it actually destroy not only his reputation but also Nixon's?

The performances from Langella and Sheen are great. (Smart decision on Howard's part to cast actors who originated their roles on stage.) Langella doesn't resemble Nixon facially or vocally, but he definitely makes up with his performance. Sheen in turn is a great counterpoint to Langella. (How he wasn't equally nominated is beyond me.)

The film itself? Just as great. It's thoroughly compelling in every scene, regardless of what's being shown. I know some people aren't as enamored by this film as I was, but no matter. Everyone's entitled to an opinion.