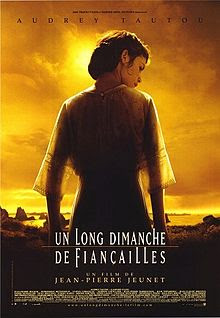 There's no worse feeling than losing someone you love. You can move on with your life, but you can never fix the gap they left in your life.

Just imagine what Mathilde (Audrey Tautou) in Jean-Pierre Jeunet's A Very Long Engagement felt when she heard the news of her fiance Manech (Gaspard Ulliel) was killed in action. She knows that he's still alive. She just needs the evidence to prove it.

This was one of the few films that focused on France's involvement in World War I. (The only other one I can think of is Stanley Kubrick's Paths of Glory.) Both Jeunet and Kubrick's films capture the very ugly side of war. (Their depictions of the trenches alone prove that completely.) Even more interesting to watch considering what Jeunet's previous film was.

The actors were good. Tautou and Ulliel are clearly the highlights of the film, but I want to mention another actor. In a supporting role, there is a pre-fame Marion Cotillard. I admire the way she displayed the femme fatale elements in her performance.

All in all, A Very Long Engagement isn't particularly memorable. Sure, Bruno Delbonnel's cinematography is lovely, but it doesn't mask the flimsy story very well. But if you like films about undying love, then this has you covered.

My Rating: ****
Posted by MovieNut14 at 11:41:00 PM
Email ThisBlogThis!Share to TwitterShare to FacebookShare to Pinterest
Labels: 2000s, movies, reviews