BOOK VS MOVIE: The Road 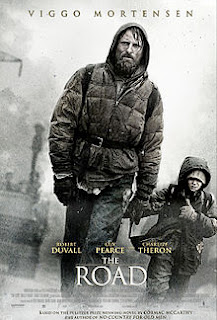 There are two types of post-apocalyptic fiction: the "fight for survival" type and the "all hope is lost" type. Sometimes the two types merge but either way, you can bet it'll be as bleak as it can be.

Just look at The Road. Depicting the aftermath of an unknown cataclysm, the story chronicles the flicker of hope among the few survivors. To be honest, not many stories with post-apocalyptic themes tend to focus on that.

Cormac McCarthy's novel is possibly the bleakest piece of literature out there. What makes his writing so unsettling is that McCarthy doesn't go into grand detail when describing things. He leaves everything to the reader's imagination.

John Hillcoat's film manages to keep the spirit of McCarthy's novel intact. Its star Viggo Mortensen is ideally cast here. (I admire actors who display immense subtly.) The even bleaker backdrop makes the complete transition from page to screen.

That said, both the novel and the film are vastly different in regards with presentation. McCarthy's novel is more devoted to the vast bleakness reality has become. Hillcoat's film, which omitted a few scenes from the novel, focuses more on the sentiment between father and son, To me, it's evident as to which of the two is better. (But both are quite good.)

What's worth checking out?: The book.
Posted by MovieNut14 at 5:46:00 PM
Email ThisBlogThis!Share to TwitterShare to FacebookShare to Pinterest
Labels: book vs. movie, reviews