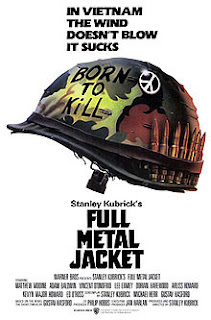 War is hell. Everyone knows that. When Hollywood depicts it, they only seem to capture the carnage. It's only once in a blue moon where they explore the madness soldiers endure during battle (and even afterwards).

It seemed inevitable that Stanley Kubrick, who often capture insanity within humanity, would make a war film. He did with Paths of Glory in 1957 and thirty years later, he re-visited the war genre with his penultimate film Full Metal Jacket. The wars depicted are very different (Paths of Glory focused on World War I, Full Metal Jacket Vietnam), but the themes are very similar.

One complaint some people have with Full Metal Jacket is that the two halves bear no resemblance to each other. I think the differing factors is a nice touch. Seeing reality go from the controlled nature of boot camp to the pure chaos of combat is pretty damn staggering.

And knowing Kubrick, he keeps that insanity motif running throughout the film. And boy, does he know how to use it to the fullest. Just pay attention to that first half of the film. The outcome makes what Jack Torrance becomes in The Shining (and what Alex DeLarge is at the start of A Clockwork Orange) pale in comparison.

I'll admit Full Metal Jacket isn't Apocalypse Now but it definitely holds its own in regards to war being hell. (Fairly certain that this and Paths of Glory would be an awesome double feature.) Oh, Kubrick, you mad genius. You've made me love another work of yours.