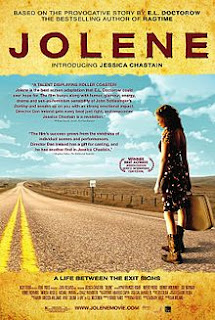 There's something interesting about watching an actor in something they did early in their career. Whether it's seeing an aged actor when they were much younger or seeing how their career started, it's worth taking a look.

The main reason for why I watch early works of actors (and occasionally directors) is to see the film that kick-started their career. (That's one of several reasons for why I saw Atonement.) Sometimes you can see an actor starting to hone their craft. Other times you can see them starting to leave their mark in film. Either way, it's something I always enjoy watching.

That was the case with Dan Ireland's Jolene, which starred a young Jessica Chastain. Made long before she did The Tree of Life, The Help and Take Shelter, she plays a woman who leads a very vibrant personal life. Sounds like a cliche, sure, but Chastain provides a fascinating performance.

The thing about Jolene is she tends to leave an impact on the people she meets. Men usually fall in love with her instantly while women (except for one case) view her with contempt. Yet there isn't an element in Jolene that suggests she's promiscuous or a home wrecker. She's honestly just the girl next door.

Jolene isn't perhaps the best thing Chastain has done, but that performance of hers is one that sticks. (Can't say the same about the film though.) This has definitely gotten me more interested into what path Chastain's career goes down. Here's hoping she has staying power.

My Rating: ****
Posted by MovieNut14 at 11:50:00 PM
Email ThisBlogThis!Share to TwitterShare to FacebookShare to Pinterest
Labels: 2000s, movies, reviews