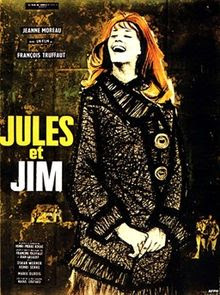 If and should I see a foreign film, there's a strong likelihood that it'll be French. It's mostly because of the French New Wave, but I think it's also because the more prominent foreign directors are French. (But that's just my theory.)

Within the last year or so, I've gotten acquainted with several notable names of French cinema. Godard, Melville, Bresson, Malle...I saw their work. And I must say, they know what they're doing.

Another French director I like and am starting to watch is Francois Truffaut. I loved The 400 Blows and Day for Night, so I was curious as to what else he made. I opted for Jules and Jim, which apparently provided some influence for Martin Scorsese when he made Goodfellas. (The technical aspects, mind you.)

Anyway, I was intrigued by the way the film was shot. It was almost as if Truffaut let Raoul Coutard go crazy with the camera. That's of course not a bad thing, but you can tell that manic camerawork alone provided an influence for future films.

Although not my favorite of the Truffaut works I saw (that's probably Day for Night), Jules and Jim is still an amusing watch. I might appreciate it more on a re-watch, but for now I can only say I liked it. I will also add that Jeanne Moreau is great here.