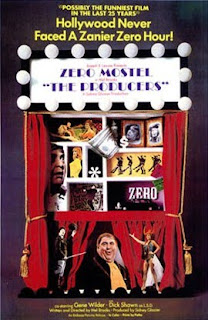 You know how some directorial debuts become thet best-known works of a director? Some notable examples are Sidney Lumet's 12 Angry Men, Orson Welles' Citizen Kane and John Huston's The Maltese Falcon. Another good example is Mel Brooks' The Producers.

Theatrical producer Max Bialystock (Zero Mostel) is having difficulty producing successful plays. He's stooped down to romancing elderly women for money. Accountant Leo Bloom (Gene Wilder) points out that Max made more money from a flop than from a successful play. Because of this, Max and Leo try to find material bad enough for it to be a flop. Their answer? Springtime for Hitler.

It usually takes a lot for a movie to make me laugh a lot. And having seen Brooks' two other well-known movies (Blazing Saddles and Young Frankenstein), I was a little uncertain that it would deliver. But hey, Brooks did win an Oscar for its screenplay. Not bad for first movie.