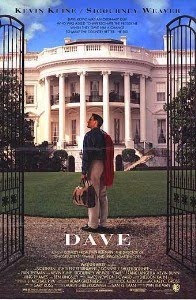 With Up in the Air getting Jason Reitman some of the best reviews of his directing career, I thought I might review a little-known movie his father Ivan did a few years back.

Dave Kovic (Kevin Kline) gets an offer from the Secret service: to impersonate President Bill Mitchell (also Kline) since they both resemble the other. Dave's doing it because Mitchell is having an affair with one of the staff from the White House. Mitchell gets a stroke in an awkward position and goes into a coma. Chief of Staff Bob Alexander (Frank Langella) tells Dave the news and to keep Mitchell's stroke a secret. Dave's now posing as the President of the United States until Mitchell recovers, which makes Mitchell's wife Ellen (Sigourney Weaver) skeptical of her husband's change in behavior.

The movie was enjoyable. It's definitely something that would kill the afternoon. Don't get me wrong, it's good but it felt like it needed something more.

My Rating: ****
Posted by MovieNut14 at 11:14:00 AM
Email ThisBlogThis!Share to TwitterShare to FacebookShare to Pinterest
Labels: 1990s, director: Ivan Reitman, movies, reviews