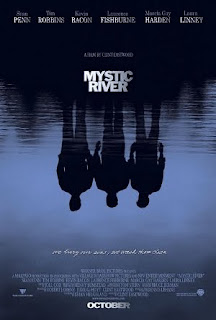 I read somewhere that the heir to Marlon Brando's acting throne was Robert De Niro. That made me wonder who would take his place when the time comes. The answer was clear after seeing Mystic River: Sean Penn.

In 1975, three boys, Sean Devine, Jimmy Markum and Dave Boyle, are playing on a sidewalk in Boston when Dave is taken by two men and becomes a victim of sexual abuse. He manages to escape the abuse, but not the memories which continue to haunt him as an adult.
Years later, Sean (Kevin Bacon) is a police officer, Jimmy (Penn) is an ex-convict who runs a convenience store, and Dave (Tim Robbins) is a blue-collar worker trying to protect his son from what he endured. The three come together when Jimmy's daughter Katie (Emmy Rossum) is found murdered.
Boy, I can tell you one thing and one thing only about Mystic River: it was damn good. And I mean it. Eastwood's direction was dead on, Penn and Robbins' performances were stellar, and the movie probably would've won Best Picture had it not been for The Lord of the Rings: The Return of the King.
My Rating: ****1/2
Posted by MovieNut14 at 8:23:00 PM
Email ThisBlogThis!Share to TwitterShare to FacebookShare to Pinterest
Labels: 2000s, director: Clint Eastwood, movies, reviews