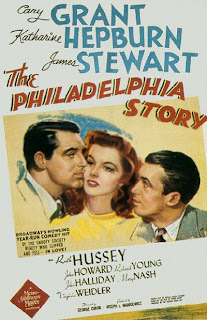 This review is part of the Katharine Hepburn Blog-A-Thon over at Encore's World of Film and TV.

With this being the only Katharine Hepburn movie I've seen so far, I can't really say that this is her best role but she is good. Grant's work is also good (and charming), but like Hepburn, this is so far the only movie I've seen him in. Stewart definitely earned the Academy Award nomination, but I'm a little sketchy on the win. Personally, Henry Fonda for The Grapes of Wrath should've won, and Stewart should've won the previous year for Mr. Smith Goes to Washington. But overall, he is also good. The movie I liked very much. Having seen a few Billy Wilder and Woody Allen movies prior to this, I kinda expected what the chemistry throughout the movie would be like. But it still works.