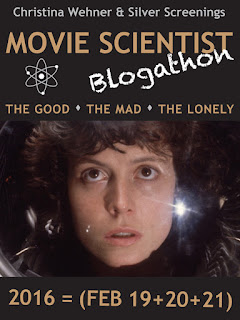 Christina Wehner of her self-titled blog and Ruth of Silver Screenings have teamed up to discuss the scientists of the silver screen. My contribution for this one will be a bit shorter than the other ones I've done as of late. (Hopefully it'll still be good.) So my choice for this one?

As everyone and their mother knows by now, this was one of three roles Sellers did in the film. While Captain Mandrake and President Muffley fall firmly in the "only sane man" trope, Dr. Strangelove is clearly under the "mad scientist" trope. (The fact that Kubrick, a notorious perfectionist, allowed Sellers to ad-lib for all three roles, especially for Strangelove, says everything.) 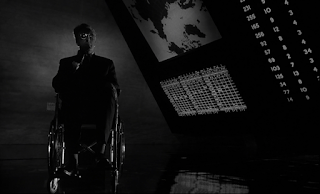 Now while he's the title character, Strangelove isn't in the film that much. That said, however, he basically steals the whole show. (Then again, this is inevitable when Sellers is involved.) And all of this comes to a head in the final scene as he fights his own right hand. (Yeah, long story on that.) 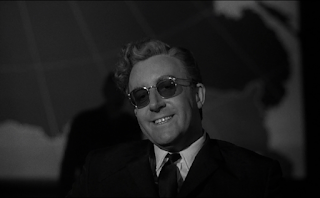 Playing with the numerous sexual references through the film (to the point where you're amazed they got away with all of that back in 1964), pay attention to Strangelove at the end. He explains that in order for the human race to repopulate after the end of the world, it will require a ratio of ten women to every man. Apparently the prospect excites him so much, the wheelchair-bound scientist stands up. ("MEIN FÜHRER! I can WALK!") God bless innuendos in old movies. 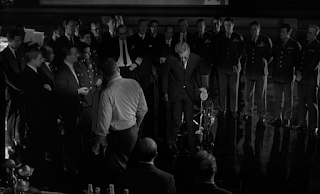 Posted by MovieNut14 at 10:04:00 PM
Email ThisBlogThis!Share to TwitterShare to FacebookShare to Pinterest
Labels: blogathon/meme