The Ballad of Little Jo 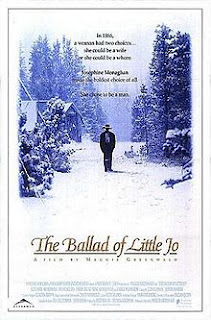 If history has taught us anything, it's that you were in trouble if you weren't straight, white or male. Homophobia, racism and sexism were rampant (and it's only slightly improved over the years). God, when will we learn from our past mistakes?

It didn't take Josephine Monaghan (Suzy Amis) much to realize that in Maggie Greenwald's The Ballad of Little Jo. After having an illegitimate child, she flees to the Old West. And knowing there are limited options for women, she begins posing as a man to survive. But how long will this charade last?

A common theme found regularly in westerns (especially in more recent titles) is the misogyny the few female characters face. (Few because more often than not, said female characters are the obligatory prostitutes in westerns.) So having a western not only have an actress as the lead but one not reduced to sexist cliche says everything.

The Ballad of Little Jo also isn't your standard film involving a trans character. Jo primarily exists as a means for Josephine to survive in a society not forgiving to women. Not a normal element found in fiction, and most certainly one seldom well-written when it's used.

The Ballad of Little Jo isn't anything too groundbreaking though Greenwald does present an interesting story. (Fun fact: it's based on real events.) Quite honestly, we need more westerns that don't involve white guys and guns a-blazin'.

My Rating: ****
Posted by MovieNut14 at 4:58:00 PM
Email ThisBlogThis!Share to TwitterShare to FacebookShare to Pinterest
Labels: 1990s, directed by women, movies, reviews