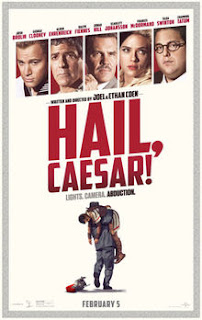 As the song goes, there's no business like show business. And sometimes the behind the scenes antics are more entertaining than the finished product. Romantic entanglements, petty squabbles, disorderly behavior...these are some of the problems one might face.

And boy, all these problems and more come into focus in Joel and Ethan Coen's Hail, Caesar! (and then some). Set at a small Hollywood studio during the 1950s, it follows the chaotic (and sometimes screwball) antics its stars endure and studio fixer Eddie Mannix (played to deadpan glory by Josh Brolin) trying to cover up said antics. It's a task easier said than done when Baird Whitlock (George Clooney) gets kidnapped.

But it's not just the state of Hollywood Hail, Caesar! shines a light on. After all, it's set during a time of high tension (thanks to the Cold War) and higher morals. Debauchery, pregnancies out of wedlock and certain political leanings weren't exactly smiled upon back then, especially if you work in Hollywood.

While watching Hail, Caesar!, several observations were made. Brolin and Ralph Fiennes need to do comedy more often (Inherent Vice and The Grand Budapest Hotel respectively are recent testaments to that claim), Clooney needs to ham it up more often, Channing Tatum has a promising career as a character actor ahead of him (if The Hateful Eight is also any indication), and Alden Ehrenreich  will hopefully be sought out more after this. Oh, and the Coen brothers need to add some more depth to their female characters. (Fargo isn't enough!)

A few problems aside, Hail, Caesar! is an entertaining watch. (Certainly less melancholy than the Coens' previous film.) It honors both a bygone era of Hollywood and the escapist effect movies have on us. (Oh, an amusing bit of trivia. Mannix was a real-life Hollywood fixer and was also featured as a character in Hollywoodland ten years prior. Mannix's wife Toni in the latter film was played by Diane Lane, Brolin's then-wife. Deliberate casting or just a coincidence? You decide.)