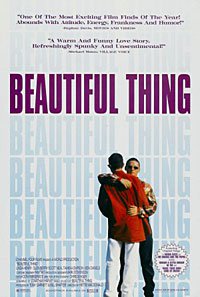 Once one hits their teen years, they start realizing the things going on around them. They begin seeing that the world they're a part of isn't as perfect as they thought it was. They become more involved in things they shouldn't. And most of all, they may find themselves attracted to their friends.

Such is the case with Hettie MacDonald's Beautiful Thing. Revolving around British teens Jamie (Glen Berry) and Ste (Scott Neal), the film shies away from bias towards relationships of this nature and shows instead the comfort the two leads share. (Hey, they have their own problems.)

Released in the aftermath of the AIDS panic (Philadelphia was released a few years prior), Beautiful Thing shows that fiction wasn't going to back down in the wake of a health crisis. Writer Jonathan Harvey (who also wrote the play the film's based on) moves away from stereotypes to depict the sensations of young love. (Remember, folks: sex and love are not the same thing.)

As mentioned earlier, Beautiful Thing doesn't linger too much on angst the boys might feel in regards to their sexuality. It focuses instead on their home lives (Jamie lives with his single mother, Ste's father is abusive) and how it affects them. Again, there's more to a teenager's life than the possibility of getting laid.

Beautiful Thing certainly lives up to its name. It shows on a simple scale blossoming romance of youth, one that doesn't revolve around the physical act. And the final scene is deeply endearing.

My Rating: ****
Posted by MovieNut14 at 5:34:00 PM
Email ThisBlogThis!Share to TwitterShare to FacebookShare to Pinterest
Labels: 1990s, directed by women, movies, reviews