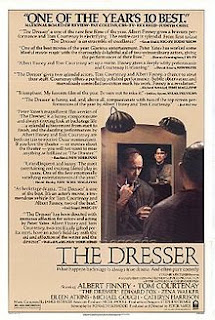 When the lives of actors get the spotlight within fiction, what's shown has said actors trying to grapple with their personal demons before they go on and perform. From self-doubt to varying addictions, the lives of those constantly under the watchful eyes of the vast public can be fascinating to watch.

Peter Yates' The Dresser is one such film to focus on the backstage drama of a theater actor but there's so much more to the film than that. It also focus on titular dresser Norman (Tom Courtenay), who has the patience of a saint to deal with the demands of "Sir" (Albert Finney). And that's just the tip of the iceberg.

The Dresser is also set during the Blitz, a time of high stress for natives of the British Isles early on in World War II. It was hard for them to keep calm and carry on as the Germans were dropping bombs on them. Some took refuge in watching plays, a sanctuary from what was happening past those doors.

The performances from Finney and Courtenay are a nice foil to each other. The chaotic alongside the (relatively) calm, the disoriented alongside the focused. These contrasting personalities seldom clash but when they do, it provides a majority of the film's emotional torque.

The Dresser explores both the mystique of the theater and the simple nature of human interaction. As with many other British films from that era, it doesn't rely on lewd sex or brash language to tell its story; it just needs a good script.