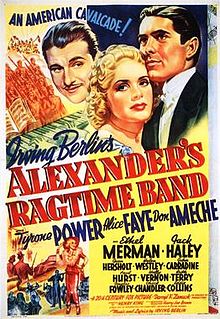 There's something different about musicals from Hollywood's Golden Age than the select few we get nowadays. Maybe it's the charisma from the stars. Maybe it has to do with the musical numbers themselves, what with the high-energy dancing. Regardless, they're always entertaining.

Now Henry King's Alexander's Ragtime Band isn't as well-known as Yankee Doodle Dandy or Singin' in the Rain but it should be. It has the right balance of comedy, drama, and, of course, music. (Not an easy combination, let's be honest.)

Admittedly Alexander's Ragtime Band is more or less a showcase of numerous Irving Berlin songs (and sometimes the plot gets in the way) but that doesn't matter. After all, isn't the whole point of a musical its entertainment value? (Well, most of the time it is, anyway.)

Tyrone Power and Don Ameche handle all of the acting for the film while Alice Faye dabbles in both that and singing most of the film's songs. But Ethel Merman easily steals the show when she starts singing. (There's a nice subtle bit of acting from Power at one point. Pay attention to his expressions when Faye's singing "Now It Can Be Told".)

Alexander's Ragtime Band is very entertaining to watch for sure. From Faye and Merman's musical performances to the general mood of the film, it's the kind of picture that's best suited for a chance to unwind after a long day. And again, it should be better known.