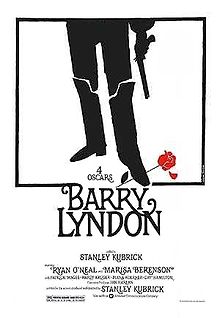 As Stanley Kubrick had proven time and time again, he was an absolute perfectionist. With the exceptions of Peter Sellers and R. Lee Ermey, he wanted his actors to follow the script word for word. He would shoot the same scene over and over again until the final result suited him. (Is it any wonder that it was a rarity for actors to work with him more than once?)

And it all came to a head with Barry Lyndon. Thanks to the work from John Alcott, it's easily the most beautiful-looking film of Kubrick's career. (No surprise that Alcott's work earned an Oscar.) But there's more to the film than gorgeous cinematography.

In comparison to some of his other work, Barry Lyndon is easily the most civil of Kubrick's films. (Bear in mind its bookends are A Clockwork Orange and The Shining.) Indeed, the delicate veneer of the film may seem out of place for the man later responsible for Full Metal Jacket and Eyes Wide Shut, but this film displays a defiance regularly found in Kubrick's work.

And at the same time, Barry Lyndon seems like an unusual change of pace for Kubrick. After all, the film made before this one was brimming with violence and anarchy to an almost gleefully twisted level. So having Kubrick tackle territory more familiar to the likes of James Ivory might have looked odd to some forty-plus years ago.

Barry Lyndon is a bit stretched out in regards with the run time but it is gorgeous to look at. Again, it feels strange to see a Kubrick film be this civil but one wonders what another costume drama in his hands would be like... (More than likely similar to this: a genteel nature, fine details that look stunning when enhanced by high definition, and a run time that makes it feels like it's been playing for nearly a week.)