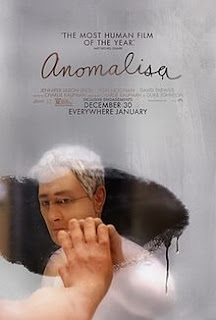 Frequently we get films and novels that examine humanity and its flawed nature. Of course many times said condition is glamorized to appeal to the masses more. Is it that hard to show the ugly truth on life?

So naturally it's ironic that the most human work of fiction to make its presence known is in the form of stop-motion animation. Charlie Kaufman and Duke Johnson's Anomalisa follows a day in the life of Michael Stone (voiced by David Thewlis) as he arrives in Cincinnati. Through his perspective, we see how Michael views the world around him.

This being a work from the mind of Kaufman, Anomalisa is a breath of fresh air from the countless sequels and by-the-book biopics. After all, this is the man responsible for writing Being Jon Malkovich, Adaptation and Eternal Sunshine of the Spotless Mind, so of course his sophomore directing effort will be an original idea. (That's something that has to be admired about Kaufman; the stories he writes are never of the conventional sort.)

There's an element in Anomalisa that may resonate with those suffering from depression. Through Michael's eyes, the people he encounters look no different from one another. If you yourself have ever been in a situation like Michael's, you might have seen yourself as an outcast amid normal people and silently hoped that you'll be noticed by someone else who stands out in a crowd.

Anomalisa is deeply felt and fully realized with its story. Thanks to the work from Thewlis, Jennifer Jason Leigh and Tom Noonan, it's a film that will surely not be forgotten any time soon. (And hopefully one that everyone will see.)

My Rating: *****
Posted by MovieNut14 at 10:03:00 PM
Email ThisBlogThis!Share to TwitterShare to FacebookShare to Pinterest
Labels: 2010s, movies, reviews