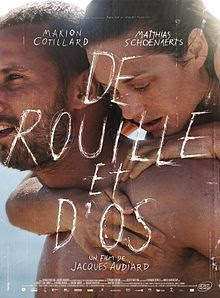 Jacques Audiard's Rust and Bone is different from most of the other titles released last year. Many films try to follow one specific plot. Rust and Bone instead follows the lives of two people who first meet by chance.

The people in question are Alain (Matthias Schoenaerts) and Stephanie (Marion Cotillard). He is an unemployed single father trying to get at least a decent life for he and his son. She is a killer whale trainer recovering from a debilitating accident. Both have differing personalities but you know what they say about opposites attracting. (Believe me, I tried very hard to make that not sound like a bad romantic comedy set-up.)

Schoenaerts plays Alain as an unwilling brute. He tries to keep his cool but sometimes he loses it when he really doesn't want to. (This makes his occasional kick boxing fights somewhat justified.) I can't wait to see what else Schoenaerts has in store.

Cotillard in turn is straight up transfixing as Stephanie. Far from most of the roles Hollywood's been giving her following her Oscar win, she gives a very raw performance stripped of glamour. (Just pay attention to her hospital scenes.) It's agreed by a handful of people that Cotillard is one of the best actresses working today. Her work here is more proof of that.

Rust and Bone is a really great film. Free of restrictions from most films, Audiard shows the true nature of these two people. It also convinced me to seek out Audiard's earlier film A Prophet.

My Rating: *****
Posted by MovieNut14 at 11:46:00 PM
Email ThisBlogThis!Share to TwitterShare to FacebookShare to Pinterest
Labels: 2010s, movies, reviews