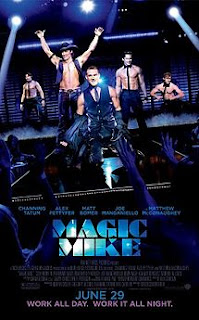 This must have had a number of people going, "What?" Steven Soderbergh, the man responsible for Traffic and Sex, Lies and Videotape, would be making a film revolving around...um, male strippers. It sounds like an extremely strange idea yet it somehow works.

With a concept like that, Magic Mike could have fallen flat on its face at any point. But I think because Soderbergh was the director, he made sure such a thing doesn't happen. (Otherwise it probably would've ended up like Showgirls or something.)

If you're wondering what I thought about the men shown, I did like what I saw. That said, I wasn't that attracted to them all. (I'll take a man in a well-tailored suit over a shirtless man with a six-pack any day.)

Before I deviate any further from this review, I should probably talk about some of the actors. (And I don't mean their bodies.) It shouldn't come as a surprise now that Matthew McConaughey is the MVP among them. (Finally! He's in a film where being constantly shirtless is relevant to the plot.)

Anyway, I was...amused by Magic Mike. The plot loses its way frequently but it's still an amusing watch. Not sure if Soderbergh was trying to do the film along the lines of Boogie Nights or not, but it sure felt like it. Basically, ladies (or guys), if you want some eye candy, this is the film for you.