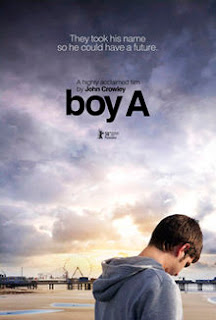 It's established early on in John Crowley's Boy A that Jack Burridge (Andrew Garfield) is someone who keeps very much to himself. He doesn't really speak to anyone unless someone is talking to him. We gradually learn why he's this way.

For starters, we learn that Jack just got released from prison. Later on, we learn he killed a child when he himself was a child. It sounds wrong that he got released after a crime that vicious, but fortunately no one knows the extent of his past. It's when it finally emerges that Jack's new life starts to crumble.

But here's the thing. Jack doesn't even act like the kind of person who would do such a thing. Even in flashbacks showing Jack as a child (especially around the time of the murder), he knows what's right and wrong. (The second child involved in the murder, not as much.) It's likely he only participated in the murder to gain acceptance from his young friend, but the film doesn't specify.

And Garfield is fascinating in his role. Thanks to his gawky smile and big eyes, he makes Jack a very sympathetic person. When the going gets rough for him, you just want to tell him gently that everything will be all right. It's one of those roles that stays with you after the credits roll.

Boy A is spotty in some scenes (mostly those when Garfield's not in them), but it is quite good. There aren't that many films told from the criminal's perspective, even less that do it effectively. Boy A is one such film, and it's one that should be given a look.

My Rating: ****
Posted by MovieNut14 at 11:04:00 PM
Email ThisBlogThis!Share to TwitterShare to FacebookShare to Pinterest
Labels: 2000s, movies, reviews