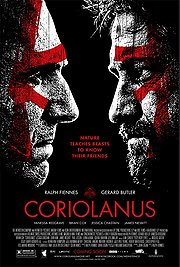 Shakespeare definitely isn't the easiest material to grasp on the first go. Sometimes it takes a while to completely get it while for some, they understand it instantly. (I envy those kind of people.) For me, I understand them better if they're acted out.

I've seen a number of Shakespeare adaptations in recent memory. The most recent one is Ralph Fiennes' Coriolanus. Now this is one of Shakespeare's lesser-known plays (and also the least performed), so I was curious to see what is was about.

Surprisingly, it wasn't far off from Shakespeare's more famous works. Like Hamlet and Richard III, a common theme throughout Coriolanus was revenge. Not just the simple kind. I mean hot-blooded seething revenge. Also like several of Shakespeare's other plays, Coriolanus can be applied to the present day (which it is here).

As with other Shakespeare adaptations, the actors are ideal. Among the names are Fiennes, Vanessa Redgrave, Brian Cox, Gerard Butler and Jessica Chastain. Fiennes gets quite intense in several scenes but man, he pales in comparison to Redgrave. (There's a reason her family is considered an acting dynasty.)

Coriolanus is certainly an ambitious project on Fiennes' part. Maybe it's because of my weak attention span, but I couldn't stay completely focused on it. That said, I do anticipate the next time Fiennes will be in the director's chair.

My Rating: ****1/2
Posted by MovieNut14 at 11:53:00 PM
Email ThisBlogThis!Share to TwitterShare to FacebookShare to Pinterest
Labels: 2010s, movies, reviews