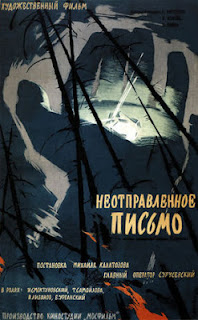 French films can be either elegant or raw. Italian films drip with class or poverty. Japanese films are brutal or sensual. These are a few musings I've made whilst watching foreign films.

It doesn't restrict to those few countries. Swedish films often go down the philosophical route. German films aren't afraid to show human nature's vicious side. And...well, those are the countries I'm most versed in.

But I did get my first taste of Russian cinema in the form of Mikhail Kaltozov's Letter Never Sent. Shot in the Siberian wilderness, the film provides a grim (and boy, do I mean grim) portrait of survival and desolation. (I've a feeling that's a common theme among Russian films.)

Thanks to the cinematography of Sergey Urusevsky, the barren locales throughout Letter Never Sent resonate on screen. The fallen forests, the murky swamps, the jagged landscapes...these are featured prominently throughout the film. And it looks beautiful.

Letter Never Sent is probably the bleakest film I've ever seen. (Then again, the title itself should have been a giveaway.) It also got me curious about Kalatozov's other films. And this may sound really odd, but this would make for an interesting double feature with The Grey.