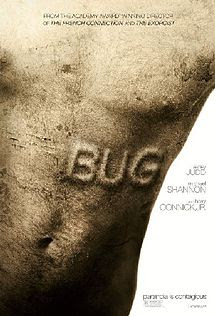 Paranoia. It is some scary shit. And to me, a nice handful of it makes for a good horror film. Not blood or guts or gore, just paranoia. (If only more directors took note of that.)

Thankfully, someone in Hollywood still knows how to scare the hell out of an audience. After all, he did direct what some call the scariest film ever made. (And his most recent film is pretty unsettling too.) I am, of course, speaking of William Friedkin.

His film Bug heaps on the paranoia and boy, does it work. Each passing moment gets more and more unsettling. (It doesn't hurt that it's written by Tracy Letts, who also wrote Killer Joe.) Hollywood, take note.

Though this is a small musing of mine as I watched it. I think Agnes (Ashley Judd) was on the verge of madness regardless if she met Peter (Michael Shannon). (She was the victim of domestic and substance abuse.) Peter was basically the break in what was left in Agnes' stability. But that's just my opinion.

Bug is really unsettling to watch. (Shannon's performance doesn't make it any easier.) Between this and Killer Joe, it's safe to say that the combination of Friedkin and Letts is a very potent one. Also, it's great to see Friedkin in his glory again. (I also won't deny that Bug scared me more than The Exorcist.)