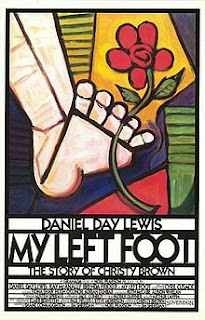 There are a number of method actors held in high regard today. Marlon Brando, Montgomery Clift, Robert De Niro, Al Pacino, Dustin Hoffman...these are actors that others call influences on their own craft. But the most determined (and possibly insane) method actor has to be Daniel Day-Lewis. He didn't win three Oscars just from a little bit of talent.

He won his first Oscar for his work in Jim Sheridan's My Left Foot, and it doesn't take much to see how he won. The role of Christy Brown is one that only a skilled actor can pull off without making it hokey. Of course, Day-Lewis is such an actor.

The physical demands of the role are very clear, but not many take into account the emotional demands. The fact that Christy is essentially trapped in his own body is heartbreaking on its own. The fact his own family can't understand him just makes the situation even worse. (His outburst in the restaurant is just as devastating.)

My Left Foot is an unbelievably raw film with an equally raw performance from Day-Lewis. It's really one of those performances that you can't watch and can't look away from. It's just remarkable in every sense of the word.