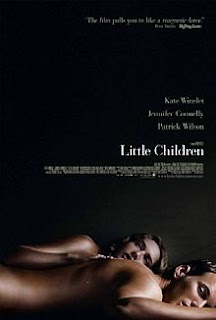 As I watched Little Children, I could tell that Todd Field was interested in deconstructing the image of picture perfect suburbia. He showed that all is not well behind the white picket fences.

His follow-up film Little Children continues that theme to a more thorough level. It isn't just chronicling a couple falling apart after a tragedy as In the Bedroom did. It shows the sometimes forbidden desires people can indulge in. And believe me, it gets pretty sinful in some scenes.

This I like with the Sarah and Brad story. She wants the attention her husband won't give her. He wants to feel in charge since his wife Kathy (Jennifer Connelly) basically wears the pants in the marriage. They find their needs in each other. This is the kind of love story I like.

Little Children is a damn good film. Winslet, Wilson and Haley give great performances as people trying to change their lives around. (On a different note, where has Connelly disappeared to?) This is a character study I can see myself watching time and time again.