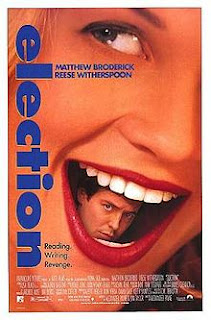 I've never been much for politics. I won't deny that this past election wasn't of much interest to me. (I did vote however.) There's something...off-putting about a candidate trying to eliminate their opponents.

Alexander Payne made no bones about it with his film Election. Yeah, it's about a school election, but it still applies to an unsettling degree. (I'm just grateful such a thing never happened at my school.)

There's something amusing about Matthew Broderick's role. It's almost as if Jim McAllister is Ferris Bueller trying (unsuccessfully) to relive his glory days as an adult. And personally, it's his best role since Ferris Bueller's Day Off.

Now Reese Witherspoon as Tracy Flick is actually terrifying. She's determined, yes, but she certainly isn't someone I want to cross paths with. Also, I can understand why some people thought she should have been nominated for an Oscar.

Election is a really great satire. Payne is definitely one of the better names tackling the genre. Broderick and Witherspoon are great here. It's one of the best titles of the 1990s.