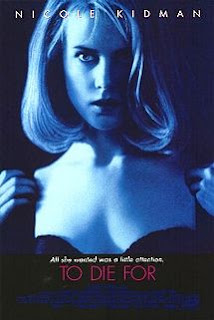 There are a number of movies based on real-life crimes (Zodiac, Monster) and there's a handful of movies where a crime is a major influence on them (Psycho, Dog Day Afternoon). If you're wondering, To Die For falls under the latter category.

It's based on the Pamela Smart case. Smart seduced her teenage lover into killing her husband, which he did. It's a juicy case to read up on, so I don't blame screenwriter Buck Henry for having a desire to turn it into a movie.

Nicole Kidman's Suzanne Stone is determined to get on TV, even if it means working as a weather girl for the local TV station of the aptly name town of Little Hope, New Hampshire. Her wardrobe looks like the 1950's threw up on her (same goes for her sense of decorating) and she always has a smile on her face as though she's forever on camera. Too bad neither her husband Larry (Matt Dillon) or her teenage lover Jimmy (Joaquin Phoenix) could see through her phony facade.

Oh man, To Die For is really funny. A tad too dark in some scenes, but it was fun to watch. Kidman's delightfully wicked performance is definitely the highlight, but I also liked Phoenix (though it looked like he was trying to channel his brother River). All in all, I liked it.