They Live By Night 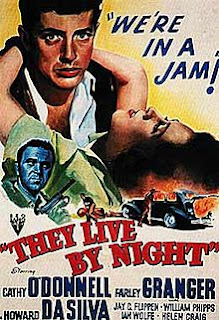 Bowie (Farley Granger) is a marked man when the movie opens. An escaped prisoner, he's one of the conspirators of a bank robbery. But it's also clear that Bowie's a framed man as well.

The press continually call him the mastermind of the crimes he's involved in, but Bowie's no more than an unfortunate witness. He merely watches the actions of his two partners in crime rather than the other way around. If you look at his expressions during those scenes, you notice that he wants to save the victim before realizing that could be him next.

Enter Keechie (Cathy O'Donnell), perhaps Bowie's escape from a life of crime. After all, on their first night on the run, they get married. They both care for each other, as clearly shown when the movie opens. However, the opening text reading "This boy and this girl were never properly introduced to the world we live in" shatters that image like a rock to a mirror.

Nicholas Ray's debut shows the essentials of noir without overdoing it. And, like many of Ray's later movies, relies more on character than plot. Worth checking out by a mile.