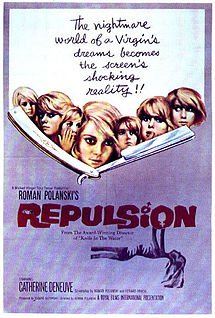 With Roman Polanski's work, we get glimpses of different locales. Such locations include New York City (Rosemary's Baby), Los Angeles (Chinatown) and Poland (The Pianist). With Repulsion, we see London.

Catherine Deneuve plays Carol, a young woman appalled at the mere thought of physical contact. She has to listen to her sister's constant lovemaking. Carol is so disgusted by intimacy, she will brush her teeth after being kissed.

A notable symbol of Repulsion are cracks. Carol finds herself fixated upon them because they represent her state of mind. As the movie progresses, the cracks (literal and metaphorical) get deeper. Deneuve's performance and Polanski's direction ensure that Carol isn't the only one going mad. So is the audience.

Throughout Carol's slow descent into madness, many of the shots used reminded me of the nightmare sequence in Rosemary's Baby. The claustrophobic feeling in the movie practically engulfs you. It will scare the daylights out of you if you're not careful.