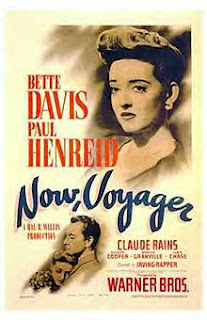 Being a woman, I'm not entirely crazy about today's "women's pictures". Most of them aren't well made. Another reason as to why I prefer the classics.

Now, Voyager stars Bette Davis, a Hollywood legend I'm starting to like. The other movies I saw her in, All About Eve and What Ever Happened to Baby Jane?, have her in charge. In Now, Voyager, she's under the suffocating control of her heartless mother.

Because of her poor upbringing, Davis' Charlotte Vale hasn't had chance to become a woman, one that's independent and full of life. Once out of her mother's grip, Charlotte blossoms into the woman she has longed to be and captures the eye of Jerry (Paul Henreid), who is stuck in a dead marriage.

I may be a tomboy, but who says I can't enjoy a good romance movie? Now, Voyager is a very lovely movie and I admire Daivs' work to no end. Maybe because I can somewhat relate to Charlotte.

My Rating: *****
Posted by MovieNut14 at 7:56:00 PM
Email ThisBlogThis!Share to TwitterShare to FacebookShare to Pinterest
Labels: 1940s, movies, reviews