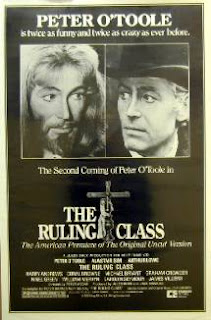 There are two tumblr gals I know and follow on Twitter who are HUGE fans of Peter O'Toole. (Seriously, you should have seen their reactions when they heard they're going to this year's TCM Film Festival.) Anyway, this review is for them.

O'Toole is Jack Gurney, the 14th Earl of Gurney. His father died under bizarre circumstances, making Jack the next Earl. The only problem? Jack believes he is God.

I have a feeling that O'Toole had fun with his performance. Having only seen Lawrence of Arabia, it was nice to see him in a less restricted role. He bursts into song and dance numbers, hangs out on a giant cross and basically gets goofier one scene after the other. In short, he is awesome. He also wins for having the best lines, like this one: "When I pray to Him, I find I am talking to myself."

Yes, some of the jokes are perverse and/or silly, but they're also funny as hell. Ridiculous as most of the movie is, I really liked it. Oh, and if you didn't understand some of the review, that's a sign saying you need to watch The Ruling Class.

My Rating: ****1/2
Posted by MovieNut14 at 6:17:00 PM
Email ThisBlogThis!Share to TwitterShare to FacebookShare to Pinterest
Labels: 1970s, movies, reviews