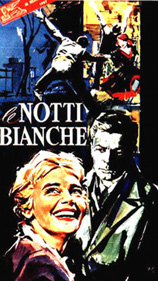 Many people claim they fall in love at first sight, but how many actually try to pursue that love?

Mario (Marcello Mastroianni) longs for companionship. Natalia (Maria Schell) longs for her lover to return to her. Their paths cross and a courtship blooms.

One aspect of Le Notti Bianche I liked was the camera shots used. Long shots were used to established a sense of Mario's loneliness while medium shots were used once Mario met Natalia. That, in my opinion, is excellent cinematography at work.

That doesn't mean I liked Le Notti Bianche less. It's devastatingly beautiful. Mastroianni, who I've only seen in Fellini movies, is slowly becoming one of my favorite foreign actors. Luchino Visconti is officially a director I seriously need to catch up on.