The Friends of Eddie Coyle 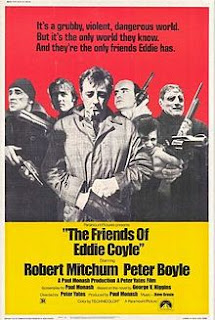 The anatomy of a crime has been dissected numerous times through books, television and movies. But not many have shown the planning of the crime to the eventual arrest.

Eddie Coyle (Robert Mitchum) is facing a lengthy prison sentence. Desperate for a shorter stint, he resorts to snitching on fellow criminals.

Now Mitchum I've identified previously as the villain (The Night of the Hunter, Cape Fear) or the anti-hero (Heaven Knows, Mr. Allison, Out of the Past). Where do I place his title role in The Friends of Eddie Coyle? Well, it's not exactly a villainous part like Harry Powell or Max Cady, but it's not entirely an anti-hero like Mr. Allison or Jeff Bailey. So what is he?

The movie itself is very well-done, especially the robbery scenes. But the narrative threw me off course a bit. That aside, it contains one of Mitchum's best performances.

My Rating: ****1/2
Posted by MovieNut14 at 11:23:00 PM
Email ThisBlogThis!Share to TwitterShare to FacebookShare to Pinterest
Labels: 1970s, movies, reviews