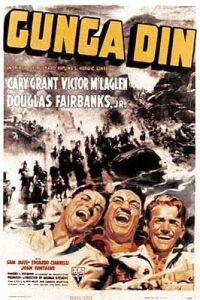 There's an interesting little story involving with this movie that I don't believe many people know about. Gunga Din was the movie that inspired Tony Curtis to create his notable Cary Grant impression. During his stint in the Navy, Gunga Din was the only movie his ship had on board for two years and the crew became so familiar with it, they would dispense the sound and take turns dubbing the dialogue. This in turn had Curtis develop an accent similar to Grant's.

The three leading men of Gunga Din are Grant, Victor McLaglen and Douglas Fairbanks, Jr. as soldiers of the British army. Fairbanks has hopes of leaving the army and getting married, but Grant and McLaglen trick him into a final mission which has them facing the entire Thuggee cult by themselves.

Gunga Din is Grant's first "non-Cary Grant role". Upon first glance it's clear why. Unlike his normal suave self, he's bumbling more than once. I wouldn't call him clueless, but he gets very close to crossing that line throughout the movie. Oh, and most of his dialogue makes it clear on how Curtis easily impersonated him.

There is a notable trademark of George Stevens shown throughout Gunga Din: the close-up (which would be used more famously twelve years later in A Place in the Sun). It's used quite a bit, just to let you know.

So what did I think of Gunga Din? Um, I liked it a lot. It was a little slow at the beginning, but it picks up the pace quickly. Worth watching if you're looking for action.