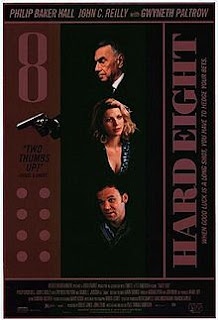 Paul Thomas Anderson is one of those directors whose movies are always completely different but are connected through their characters.

His directorial debut Hard Eight focuses on two characters: Sydney (Philip Baker Hall) and John (John C. Reilly). Both men have nothing to lose except the money in their pockets, but problems arise when John falls for cocktail waitress/part-time prostitute Clementine (Gwyneth Paltrow).

Now Hard Eight is similar to Anderson's later movies such as Boogie Nights because the leads in Hard Eight have regular lives that get thrown into extraordinary circumstances. Not that I'm complaining but after seeing four of Anderson's movies, I need something different.

Hall and Reilly, both character actors and eventually Anderson regulars, shine in their lead roles. Paltrow I liked personally because of her down-to-earth performance. She knows that life is hard, so she does what she can to make ends meet.

Hard Eight itself I only sort of liked. It didn't blow me away like Boogie Nights did, but it's an all right movie.