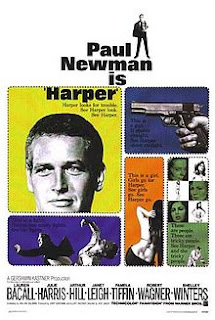 As if you didn't know already, Paul Newman is one of my favorite actors. Charming, attractive, talented, looks great shirtless, basically traits I look for in some of the actors I like.

In Harper, he plays the title character of private investigator Lew Harper. He is hired by Elaine Sampson (Lauren Bacall) to locate her missing husband.

I found it amusing that four of the major actors in Harper (Newman, Bacall, Robert Wagner, Janet Leigh) were halves of prolific Hollywood marriages. Just throwing that out there.

As I pointed out on my review of How to Steal a Million a few days ago, there were only a few smart comedies from the 1960's. And yes, Harper is one of them. Knowing Newman's sense of humor, it made the movie quite enjoyable.

Knowing that it's a mystery, you would expect thrills in every scene. But the thrills are watered down, which is actually a good thing. It has you focusing on the case more than action. Worth seeing? Oh yeah.

My Rating: ****1/2
Posted by MovieNut14 at 10:26:00 PM
Email ThisBlogThis!Share to TwitterShare to FacebookShare to Pinterest
Labels: 1960s, movies, reviews