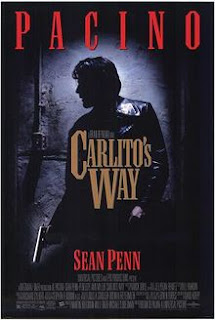 Bit of trivia for you: Sean Penn and Al Pacino were considered for the roles of Henry Hill and Jimmy Conway in Goodfellas (the parts went to Ray Liotta and Robert De Niro, respectively). Although they didn't work together in Goodfellas, they did wok together on the 1993 Brian De Palma movie Carlito's Way.

After spending five years in prison, Carlito Brigante (Pacino) plans to quit the gangster lifestyle and retire. But his sleazy lawyer David Kleinfeld (Penn) may prevent him from doing that.
I love discovering an underrated movie. Carlito's Way is just that.You think more would be more aware of it since it is directed by the same man responsible for Scarface and The Untouchables. This was Pacino's first movie after his Oscar win and although he's the lead as the aging gangster, his thunder gets stolen by Penn's snarky lawyer. Of all the crimes depicted throughout the movie, that is the most daring.

My Rating: ****1/2
Posted by MovieNut14 at 8:05:00 AM
Email ThisBlogThis!Share to TwitterShare to FacebookShare to Pinterest
Labels: 1990s, director: Brian De Palma, movies, reviews