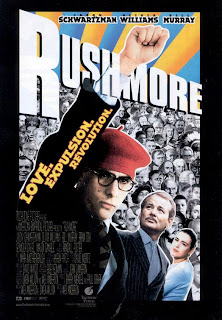 When you're called "the next" anything, you know you have it made. So when Wes Anderson was called "the next Scorsese" by the man himself, that was a sign that said you should keep an eye on him.

Max Fischer (Jason Schwartzman) is an eccentric teenager who finds himself competing against Herman Blume (Bill Murray), the father of two of his classmates, for the love of teacher Rosemary Cross (Olivia Williams).

Man, this is funny. Awkward and quirky definitely work here. Murray cracked me up to no end, as did Schwartzman. Just from this, I am now a fan of Wes Anderson. Honestly one of the best comedies in recent years.