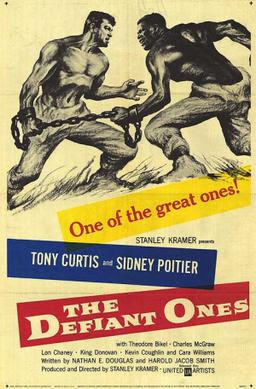 Throughout the 1950's there have been a number of social dramas released, the most notable one being On the Waterfront. Stanley Kramer was one of the most prolific directors to work on the genre.

After the van transporting them drives off the road, convicts John "Joker" Jackson (Tony Curtis) and Noah Cullen (Sidney Poitier) escape. A chain between them prevents them from going their seperate ways, but that becomes second to their need to survive.

The subject matter may be dated, but the impact it had fifty-two years ago has held up. The performances by Curtis and Poitier are remarkable. Kramer's storytelling flourishes in this. The dialogue is sharp and biting, a remnant of the tensions of those times.