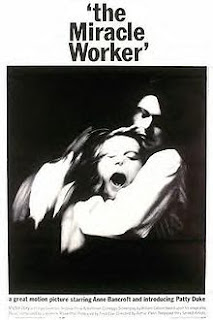 Some actors, once they're famous, become forever known for one role (James Dean in Rebel Without a Cause, Anthony Perkins in Psycho, Anne Bancroft in The Graduate, Malcolm McDowell in A Clockwork Orange). That fact may prevent people from seeing other movies they've done, either released before or after that one film that immortalized them.

Fed up by her behavior, the parents of Helen Keller (Patty Duke) hire Annie Sullivan (Bancroft) to teach Helen.

Bancroft and Duke deliver excellent performances and rightfully earned their Oscars. The direction of Arthur Penn, whose best-known work was Bonnie and Clyde, is also excellent. It's a heartbreaking story, so have tissues ready. The Miracle Worker is one of the best movies of the 1960's.