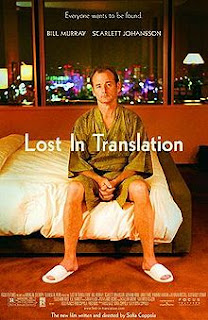 Bob Harris (Bill Murray) is an actor in Japan making advertisments for a whiskey company. Charlotte (Scarlett Johansson) is a recent college gradute whose photographer husband John (Giovanni Ribisi) is always away on assignment. Their paths cross and the story begins.

This is honestly Murray's best performance. He probably would've won too had Sean Penn not gave a hell of a performance in Mystic River. Johansson also gives a good performance. The slow pace throughout gives Lost in Translation a romantic feel. The dialogue is very witty (even if a majority of Murray's dialogue is ad-libbed). I now forgive Coppola for her crappy acting since she makes up by directing a movie that rivals her father's work.