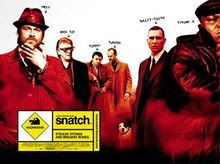 I've been watching a good number of British movies recently, more so ones from the last twenty years (Trainspotting, In Bruges). And I've noticed one major thing: the Brits drop the f-bomb A LOT.

One word best sums up Snatch: insane. It's all over the place, but it's still entertaining. Pitt captured my interest, even though I couldn't understand what the hell he was saying a good chunk of the time. The only other Guy Ritchie movie I've seen was the much saner Sherlock Holmes, and Snatch is on a whole other level.

My Rating: ****
Posted by MovieNut14 at 9:53:00 PM
Email ThisBlogThis!Share to TwitterShare to FacebookShare to Pinterest
Labels: 2000s, movies, reviews