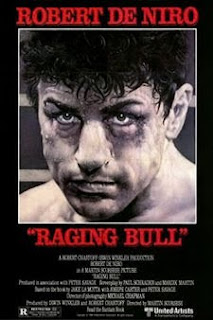 Martin Scorsese definitely has one of the most elite careers in Hollywood. He has directed some of the greatest movies ever made, maintained an eight-film collaboration with Robert De Niro, and is now working with Leonardo DiCaprio. And to honor his career with De Niro, I thought I would review one of the more famous movies they've done.

Jake LaMotta (De Niro) is a small-time boxer who later becomes middleweight champion. His violent behavior in the ring tends to interfere with his personal life, particularly his relationships with his brother Joey (Joe Pesci) and wife Vickie (Cathy Moriarty). But there is one opponent Jake cannot defeat: himself.

I said I could see how Ordinary People won Best Picture for that year. Now I'm eating my own words; Raging Bull is AMAZING. I can clearly see now why so many were (and still are) pissed off at it losing Best Picture. De Niro delivers the performance of his career as LaMotta. Had he lost, all hell would've broken loose.