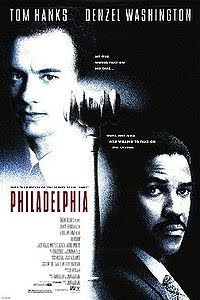 It's always movies that get on the touchy subjects (homosexuality, mental disorders) that tend to get more attention during award season. Well, in my opinion anyway.

Andrew Beckett (Tom Hanks) is a successful lawyer who is hiding two secrets: he's gay and has AIDS. He gets fired from his firm for the latter. He calls upon fellow lawyer Joe Miller (Denzel Washington), who's a bit of a homophobe, to fight against his firm.

It's always interesting to see an actor known for their comedic roles do dramatic parts (ie, Jack Lemmon in Days of Wine and Roses, Mary Tyler Moore in Ordinary People, Eddie Murphy in Dreamgirls, etc.). Hanks definitely solidified his status as a serious actor with this role. Washington delivers a strong supporting role. If you need a good cry, here's your movie.