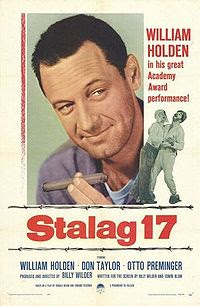 Along with Tim Burton, I'm a fan of the work of Billy Wilder. Although I've only seen five of his movies, I know enough that he's a versatile director.

Life at a German POW camp is considerably normal, excluding the numerous attempted escapes. However, the prisoners in one barrack grow suspicious of Sgt. J.J. Sefton (William Holden), who always seems to get what he wants from the guards and he bets against the aspiring escapers. Is he a spy?

I really admire the tense writing of Wilder. I also like how Holden's character you want to like, but you can't bring yourself to do that. The movie itself is brilliant.

My Rating: *****
Posted by MovieNut14 at 11:00:00 AM
Email ThisBlogThis!Share to TwitterShare to FacebookShare to Pinterest
Labels: 1950s, director: Billy Wilder, movies, reviews