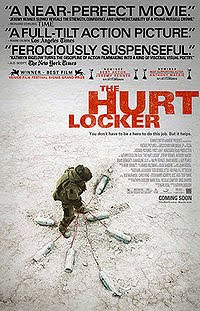 Movies that revolve around the Iraq War seem to drive audiences away since people go to the movies to escape reality, as well as critics complaining of the dramatization of the war. Thanks to Kathryn Bigelow, she blew that theory out of the water.

When SFC William James (Jeremy Renner) joins Bravo Company in Iraq, they have a month or so left in their tour of duty. He's a bomb disposal expert and he is replacing Sgt. Matt Thompson (Guy Pearce), a long-standing member of the team who was recently killed by disposing of an explosive device. To say that James loves what he does doesn't quite capture the emotional high he experiences when he gets to do what he does best. For his fellow squad members however, including Sgt. JT Sanborn (Anthony Mackie) and Spc. Owen Eldridge (Brian Geroghty), they just want to survive the few days of duty they have left. James' risk taking, however, drives them all to the edge.

I like how it feels like an action movie with all the explosions, but it isn't. Also, I appreciate the fact that Bigelow went with unknowns for the leads. Just goes to show you that you don't have to be well-known to be in a damn good movie.